Abortion can never solve a problem 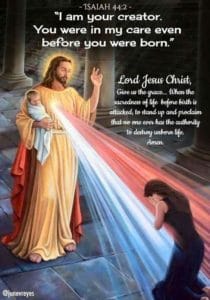 Abortion can never solve a problem.

A testimony given by a Maltese woman to Fr. Antoine Borg.

A life filled with much confusion and lies. Discovering she was pregnant, she was paralyzed with fear and anxiety, in panic, unable to think straight. She was led to London by a “friend” to have an abortion. Years later she found out she was pregnant again with an unplanned pregnancy and so again she went abroad to kill her baby.

In 2005 she encountered the image of the Divine Mercy which changed her life forever.

She found forgiveness, healing and peace within her heart.

She wishes to share her story with other women in the hope of bringing the truth that there is never a need for abortion, abortion doesn’t help women, but hurts them.

Radju Marija Malta · Fr Antoine – Rakkont Abort
Share This On
We use cookies to ensure that we give you the best experience on our website. If you continue to use this site we will assume that you are happy with it.OkRead more