April – Chapel of the Annunciation, Siġġiewi 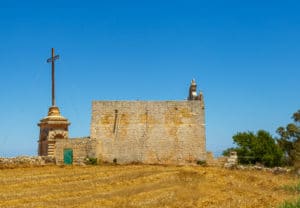 Each year Radju Marija publishes its own calendar and for 2021 each month is enhanced with a beautiful photograph of a country chapel dedicated to our Lady around the Maltese Islands. This interesting information has been collated by Mr Louis Fenech.

April – Chapel of the Annunciation, Siġġiewi

The Chapel of the Annunciation of the Angel Gabriel to Our Lady is the Siġġiewi countryside on the hill know as is-Salib tal-Għolja and is another of many chapels scattered around this old town. This chapel is considered as cultural and historical heritage both for Siġġiewi and for all of Malta.

The exact date of its first construction is unknown but the chapel dates back to the fifteenth century on land belonging to the Cathedral Dean, Dun Guliermu Tonna who yearly personally saw to the upkeep of the chapel and to the dignified celebration of the Feast of the Annunciation. The chapel was damaged many times and probably was rebuilt in 1494 and also in 1680. Above the doors leading to the sacristy were two coats of arms: those of Grand Master Carafa and Bishop Molina. These coats of arms are still visible in spite of the continuous damage and interventions carried out on the chapel. Recent studies show that the chapel was built on cracked rock resting on vulnerable clay so every movement has repurcussions on the chapel.

The chapel sufferred extensive damage over the years and had to be rebuilt after the 1693 earthquake. It was consecrated by Bishop Alpharan de Bussan in 1749 u when this same bishop visited the chapel in 1754 said it was very well kept. Unfortunately it was hit by another earthquake in 1856 and a year later was restored thanks to the donations given by people and yet another earthquake in 1923 left it badly damaged.

This chapel is mentioned in the visit of Mons Pietru Dusina in 1575 which he described as a chapel on a hill known as ix-Xagħra tal-Fuqanija tal-Qassis. It had a single altar; a door and flooring but had no rector, income or any necessities. There is written evidence that a certain Salvatore Montagnere was obliged to use income from some agricultural land of his to see to the celebration of vespers and Mass on the feast day of the Annunciation. He was also bound to pay the attending priests and feed the poor faithful who attended.

This chapel has a rectangular form with a simple facade and a bell tower. The bell, having the image of the Immaculate Conception and the coat of arms of Pope Pius IX, nowadays is on the roof of the Pastoral Centre in the area of Ta’ Kirċippu and the titular painting is in the sacristy of the Siġġiewi Parish Church.

Nowadays the chapel is in a very bad state and its door has been closed for more than fifty years. Part of the ceiling has collapsed and cracks in the wall are getting wider. To prevent further danger the chapel is surrounded by an iron fence. The much needed funds for its restoration have been found and the Ministry for National Heritage will fork out a million euro after a report commissioned by the Siġġiewi Local Council and the Archdiocese of Malta. The hilltop cross known as Laferla Cross will also be restored.