July – Chapel of Our Lady of Ransom 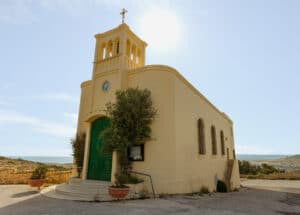 The Chapel featured in the month of July in the calendar of Radju Marija is the one dedicated to Our Lady of Ransom.

The following information was published in the special edition of SELMUNFEST of 1991.

When one hears of Selmun the image that comes to mind is one of natural beauty made of hills, valleys, sea and rocky islets but above all the majestic Palace which dominates all the hill.

On the left hand side of the Selmun Palace entrance there is another door leading to what was up to some time ago the Palace’s Chapel. This Chapel has served the people of Selmun in their spiritual needs apart from serving the owners of the Palace.

It is registered in the Offices of Il Monte di Pietè, in the acts of Notary Francesco Mamo of the 13th October 1792, that in the Chapel dedicated to Our Lady of Mercy, annexed to the Palace, a perpetual foundation was created for Mass to be celebrated every Sunday and on obligatory days for the repose of the soul of the Noble Katerina Vitale.

The titular painting of the Chapel depicts this Noble Lady praying at the feet of Our Lady and offering her wealth for the Ransom of Slaves.

It is said that Katerina offered her wealth after losing her husband Ettore. Katerina Vitale was one of the first and the greatest benefactor in this great act of mercy later called Monte di Pietà.

The Capuchin Friars too were concerned about the slaves. In 1607 whilst preaching in St John, Fra Giovanni Ma, hailing from Noto in Sicily, suggested the founding of  ‘Il Monte di Redenzione degli Schiavi’, in order to ransom Maltese slaves from the corsairs.

By the end of this sermon, people went to the sacristy and offered money to Fra Giovanni Ma as they were moved by what they had just heard.

Although there were donations, these were not enough and Katerina Vitale offered her help by pledging all her wealth for this fund and thus the Monte could function well.

For many years the Superior of the Capuchin Convent in Floriana used to be a member of the Commission in charge of collecting and distributing monies.

Friar Ercolano from Paluzzi, Friar Karlu and Friar Paul, both of them Maltese, used to teach catechism to the foreign slaves who wished to embrace the Christian Faith. In fact Friar Karlu was a victim of this mission. After more than 195 years, the old Palace chapel was no longer used as a place of worship as a hotel was built around it.

In agreement with the government of the time, a patch of land was given to the Church together with funding for the building of a new Chapel in the area.

By the end of July 1979, the old chapel was emptied and while the new chapel was being built, religious functions were celebrated in two rooms offered by the Congregation of the Daughters of the Sacred Heart in Mellieħa.

The  new chapel was designed and planned by Architect Carm Lino Spiteri.

The construction was taken care of by the Rector Dun Karm Portelli of Marsa, the last of many priests who took care of the old Chapel.

In July 1982, Dun Karm passed on the completion of the works to Patri Serafin Debattista,  a Capuchin Friar.

On the 19th of December 1982, the new Church opened its doors to the faithful and was blessed to serve all people especially the inhabitants of Selmun and all those who frequent the area during the summer months.

The beautiful painting of the Old Chapel depicting Our Lady of Ransom, by the famous Antoine Favray (1779), graces the altar of this Chapel.

This information on the Chapel of Our Lady of Ransom was published on a special edition of SELMUNFEST 1991 and was previously published in a Booklet on the occasion of the Church’s inauguration on 19th December 1982.

Our thanks to the author.