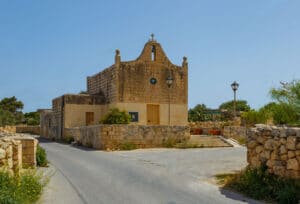 Each year Radju Marija publishes its own calendar and for 2021 each month is enhanced with a beautiful photograph of a country chapel dedicated to our Lady around the Maltese Islands. This interesting information has been collated by Mr Louis Fenech.

This church, small but big enough for the inhabitants of the area, is very old and is mentioned in many contracts dating back to the 15th and 16th centuries. The church was built in the hamlet of Magħtab on the outskirts of Naxxar.

The church is mentioned in the pastoral visit of Mons Dusina in 1575. He say that it is dedicated to the Assumption; although it was a much beloved church it lacked financial credit and a priest to take care of it. Achille Ferris confirms as well the devotion attributed to this old church.

Through the pastoral visit of Bishop Belaguer, we know that the church was rebuilt around 1649. A legend says that the church was built a few metres away from the original spot where a runaway horse stopped. This horse had taken off with a cart in which there was an infant boy. The child’s father made a vow that should the child be found safe and sound he would build a church. This is shown in a painting hanging in the sacristy which depicts this incident.

The church was built through donations from the people who used to frequent it. It had one altar on which was a painting attributed to Filippu Dingli. This painting shows the Annunciation of our Lady. On Saturdays there used to be Mass and Vespers and the lamp was lit on feast days. There also used to be Masses on February 2nd on the Feast of Purification; the Annunciation; the Visitation; the Assumption and on the Feast of the Immaculate Conception. All this was mentioned on the pastoral visit of Mons Balaguer.

The church, as can be seen, has always been in very good condition because there was a succession of procurators that took good care of it. This lead to donations of paintings, including one of St Therese of Our Lady and another of St Paul which were place on either side of the altar. As the feast approached the church would be whitewashed. Some faithful also bequested fields to provide for vespers and the feast as needed.

The church has a simple facade with a central door. Above it a circular window and a dove holding an olive leaf in its beak. There is also a bell tower with a single bell and on each side there are two small pyramids. Leading to the church is a small parvis surrounded by a low wall. On the side a small room is used as sacristy. The sacristy, apart from being used by the priest to prepare for Mass, contains a number of ex-voto paintings. These bear witness to the fact that it was beloved by many.

The church is rectangular in shape. There is a stone altar and the titular painting depicting the Assumption, surrounded by angels and looked upon by the Eternal Father. There is also a painting of the Resurrection donated by Mario Fava as attested by the writing; “Dono di Gio Maria Fava nel 1733”. He was one of the procurators of the Church. One also finds a set of paintings depicting the Via Crucis.

The church nowadays is in a very good condition. Mass is still celebrated on Sundays and Feast Days. May there always be a procurator to care for the church so that it does not fall in ruins as has happened to many similar chapels.